The APAC Retail Rankings 2021 highlight the top 10 brands for the year in each APAC market, using YouGov BrandIndex proprietary Index metric. The Index metric reflects a brand’s overall health by calculating the average of Impression, Quality, Value, Satisfaction, Recommend and Reputation. The rankings represent 12-month average of those scores.

Household hardware-chain Bunnings claims the top spot among all retail brands under the ‘appliances, homewares, sports and specialist’ segment in Australia. The retailer has nurtured a positive image among Australians through traditions like the Sausage Sizzle and has recently received praise for the kindness of its staff. JB Hi-Fi scored the highest among all retail brands that deal in electronics. Other brands that make the top five from this segment are Kmart, BIG W and Target.

Among the ‘high street, supermarkets and liquor’ segment retailers, Woolworths takes the crown, with Coles coming in next. Chemist Warehouse, the pharmaceutical retailer, is placed third followed by Officeworks and Aldi. 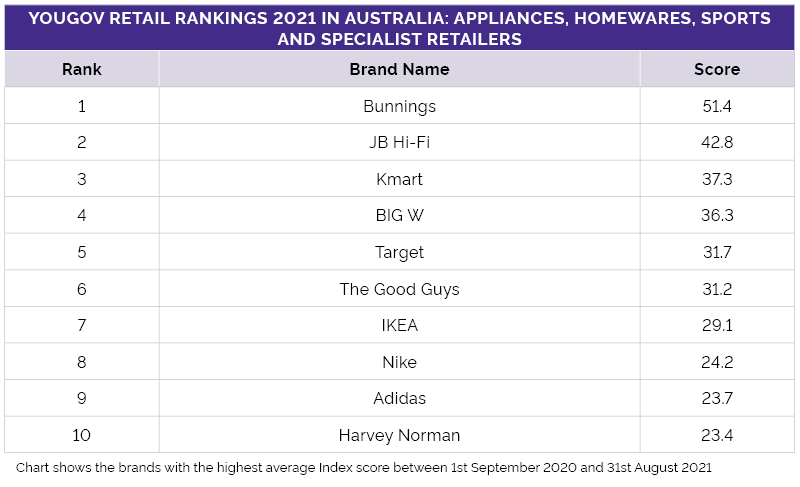 Check out the full rankings in Australia

Luxury fashion brands tended to score markedly higher than other categories of retailer in China. Chanel scored the highest in the category, followed by other multinational names such as Dior, Giorgio Armani, Hermes and Gucci.

In the sports/athletic fashion retailer segment, Li-Ning won the top spot with a comfortable margin over Nike, Anta, Adidas and Xtep, which are the other brands constituting the top five.

From the mainstream fashion retailer segment, Bosideng ranks first with a significantly higher score over Uniqlo and Metersbonwe, which are ranked second and third. 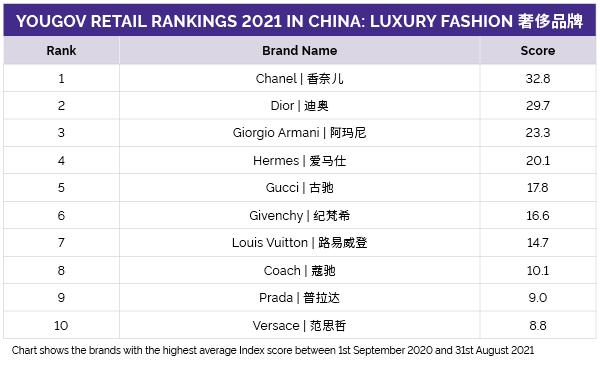 Check out the full rankings in China

Luxury watchmaker Rolex is the table-topper among all luxury fashion retailers in Hong Kong. Chanel, Louis Vuitton, Cartier and Hermes follow next.

Japanese apparel-maker Uniqlo claims the top spot in the mainstream and athletic fashion retailer category, with Nike and Adidas placed at the second and third spot.

Another Japanese brand, Don Don Donki, is ranked first among general retailers in Hong Kong. Discount megastore operator Don Don Donki, which managed to gain in popularity in Hong Kong during the pandemic, reported strong revenue figures from its Hong Kong operations over the last fiscal year. PARKnSHOP, Mannings, Muji and IKEA are the other brands that make up the top five in the retail category. 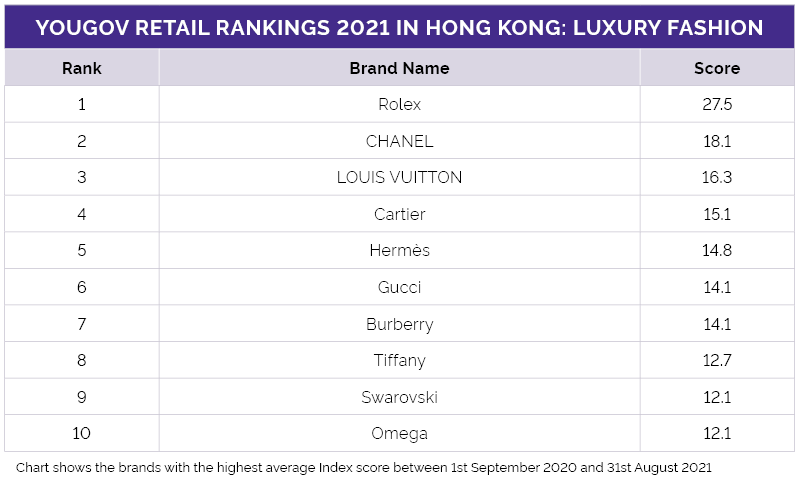 Check out the full rankings in Hong Kong

Adidas is the top draw among fashion retailers in Indonesia, with Nike hot on its heels. There’s a significant gap in scores between those two and Levi’s, which comes in in the third spot.

In the general retailer category, Indomaret scored the most points. Alfamart comes in at second place followed by Gramedia and TRANSmart Carrefour. 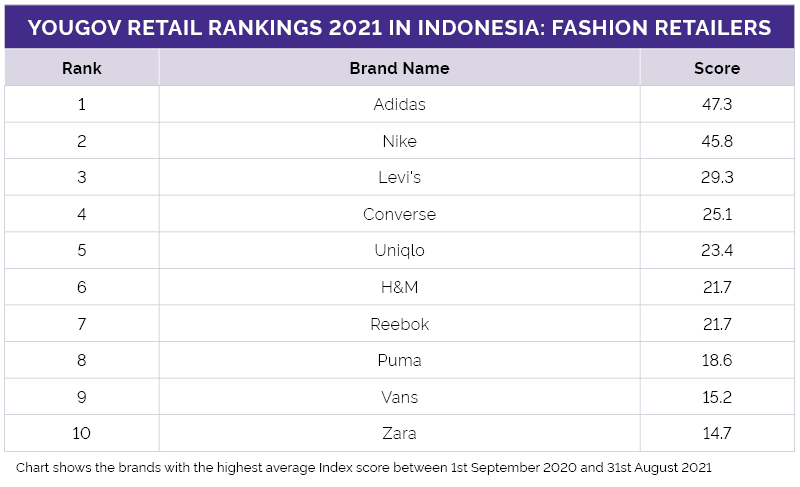 Check out the full rankings in Indonesia

Uniqlo is the table-topper among fashion retailers in Singapore. Just as in Hong Kong, the Japanese clothing brand has fared well in Singapore and seeks to continue expanding through both online channels and new ‘brick-and-mortar’ stores. After a gap of nearly 20 points, Adidas comes in at second place, closely followed by Nike.

In the general retail segment, FairPrice takes the top spot. After a significant gap, Sheng Siong comes in at second place followed by IKEA and Cold Storage. 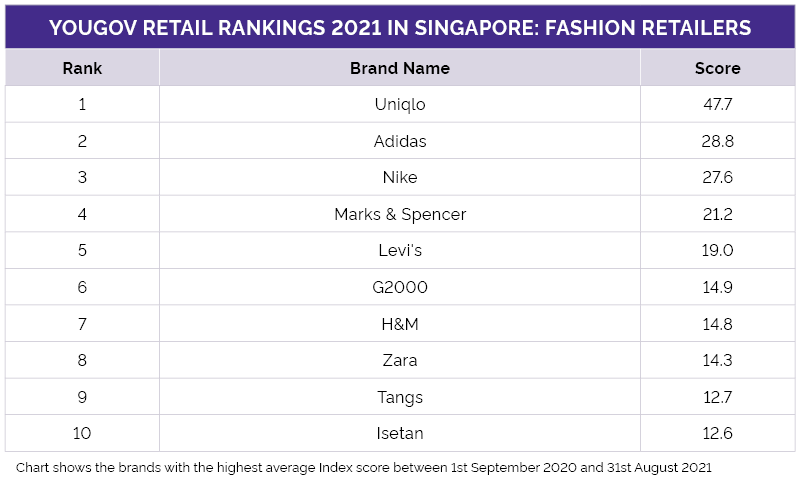 Check out the full rankings in Singapore

Convenience stores across the world benefitted from pandemic-induced shopping fervor and the story was no different in Thailand. 7-Eleven is the top performing general retailer in the country over the last year and seems committed to growing despite ongoing lockdown restrictions. The company added 311 new conveniences stores in the first half of this year, mainly in upcountry areas in Thailand, and plans to expand its delivery services.

Lotus's, Big C, Makro and Watsons are other top performers in the general retail category. 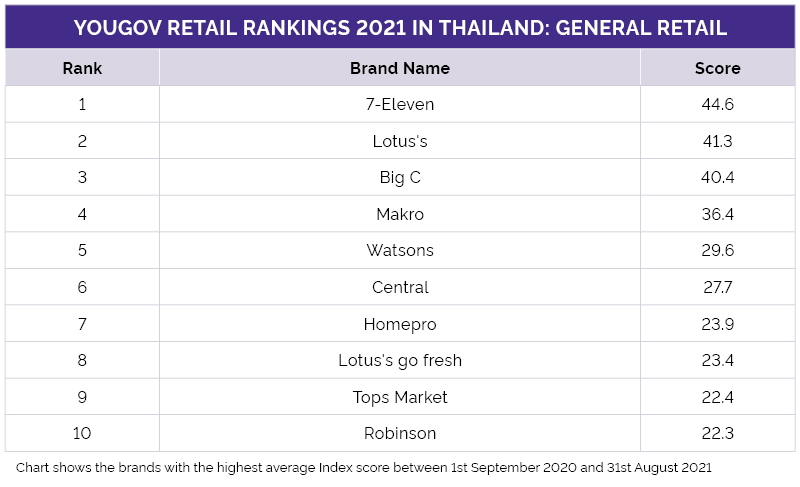 Nike, Adidas, Levi's, Uniqlo and Lee are the top performing brands in the fashion retailer segment in Thailand.

Check out the full rankings in Thailand

Want to know more? To see your brand’s Index ranking please click here and one of our experts will be in touch.

Methodology: The brands in YouGov Retail Rankings were ranked based on their Index score, which is a measure of overall brand health calculated by taking the average of Impression, Quality, Value, Satisfaction, Recommend and Reputation over a period of 12 months.

The rankings chart shows the brands with the highest average index score between September 1st 2020 until August 31st 2021. The scores are representative of the general population of adults 18+ (some are online representative).

All scores listed have been rounded to a single decimal place; however, we have used additional precision to assign ranks. All brands must have been tracked for at least six months in order to be eligible for inclusion in the rankings.