Across Australia, appeals to ‘gamble responsibly’ are a common tag shown alongside adverts that promote gambling activities across a range of sporting and other activities.

Evidence by academics overseas has indicated that such slogans have little to no impact. For instance, Newall and his colleagues at the University of Warwick (2019) found that the commonly used phrase, “When the Fun stops, stop” gambling warning label did not achieve its aim of prompting more responsible gambling behaviour in UK Premier League football supporters[1].

New research by YouGov now reveals that hardly any Australians believe that the ubiquitous equivalent slogan used in this country, “gamble responsibly” is effective in reducing problem gambling. The poll reveals that almost three quarters of Australians believe that the phrase ‘gamble responsibly’ placed on adverts about betting has no effect whatsoever on reducing problem gambling (70%). Only 19% believe that the phrase has some impact, with just 3% believing that the slogan is effective, and 8% unsure. 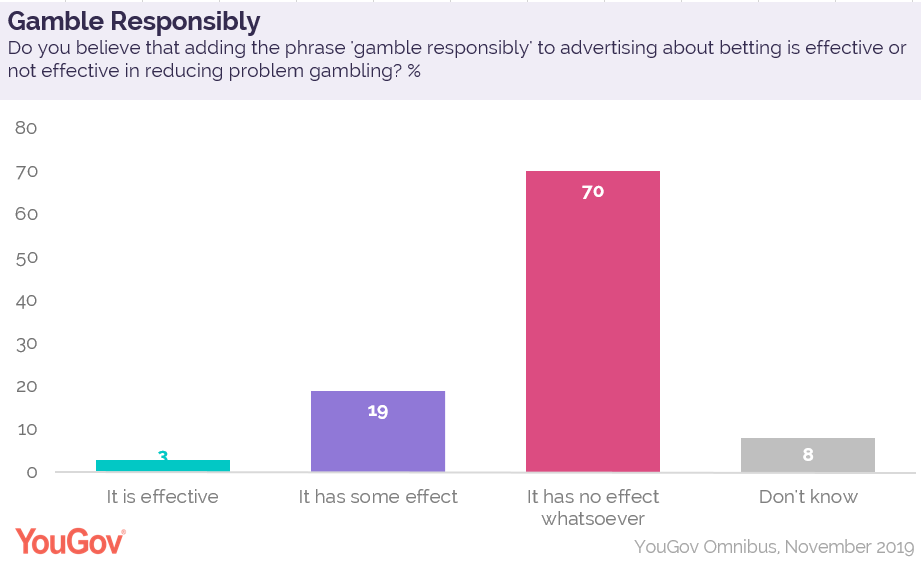 Older Australians are the most likely to believe that the slogan has no effect with 78% of Australians aged over sixty sceptical about the impact of the phrase. Whilst slightly less pessimistic, the clear majority of 40-59 year olds and 18-39 year olds also doubt its actual impact in reducing problem gambling (by 69% and 63% respectively).

People who do not gamble or gamble very rarely are among the least convinced that the phrase has an impact (74% and 71% respectively). Amongst regular gamblers (people who say they gamble at least a few times a month or more), the clear majority still believe that the responsible gambling appeal on adverts has no effect (58%), while just 7% believe it is effective.

This poll was conducted between 14-20 November 2019 by YouGov – the international data and polling company. The poll is based on a large sample of 1,007 Australian citizens across the country.