Republicans have had long, contested nomination campaigns before, so we have a good idea of what their impact is on the party’s chances in November. The 1996, 2008 and 2012 Republican primaries lasted until the late spring and featured numerous ads with Republicans attacking each other.  Bob Dole’s loss to Pat Buchanan in New Hampshire in 1992 extended the campaign and Dole’s finances, which hurt him in the general election.  In both 2008 and 2012, the nomination process featured Republicans targeting each other.  In each of these years, Republicans suffered high levels of voter defection in the general election.  In 1996, almost 20 percent of Republican identifiers did not vote for Dole.  In 2008 and 2012, the Republican defection rate was twice as high as it was in 2004.  In those same elections, Democratic defections were less than one-half of the Republican rates.  Drawn out, nasty primaries hurt parties in general elections.

The chart above shows the trend in the “would-never-vote-for” percentage for each of five remaining Republican candidates over this period. This percentage increases for every candidate. The percentage unwilling to consider Kasich rises from 33% to 44%, Rubio from 35% to 39%, Carson from 39% to 47%, Cruz from 41% to 46%, and Trump from 51% to 55%. The main effect of the nomination campaign has been to increase hard core opposition to Republican candidates.

It’s hard to win an election when almost half of the voters start out unwilling to consider voting for you. The best any Republican candidate does is Rubio, and, for him, nearly two out of every five voters still say “no chance.”  In contrast, Democratic candidates are not making things worse for themselves.  In December of 2015, 38% of respondents said they wouldn’t vote for Bernie Sanders and in February that percentage still stands at 38%.  Hillary Clinton started with high negatives—48% in December---but these have fallen slightly to 47%.  In short, Democrats are having a vigorous campaign that has, so far, not hurt their candidates’ chances, while Republicans have been destroying one another. 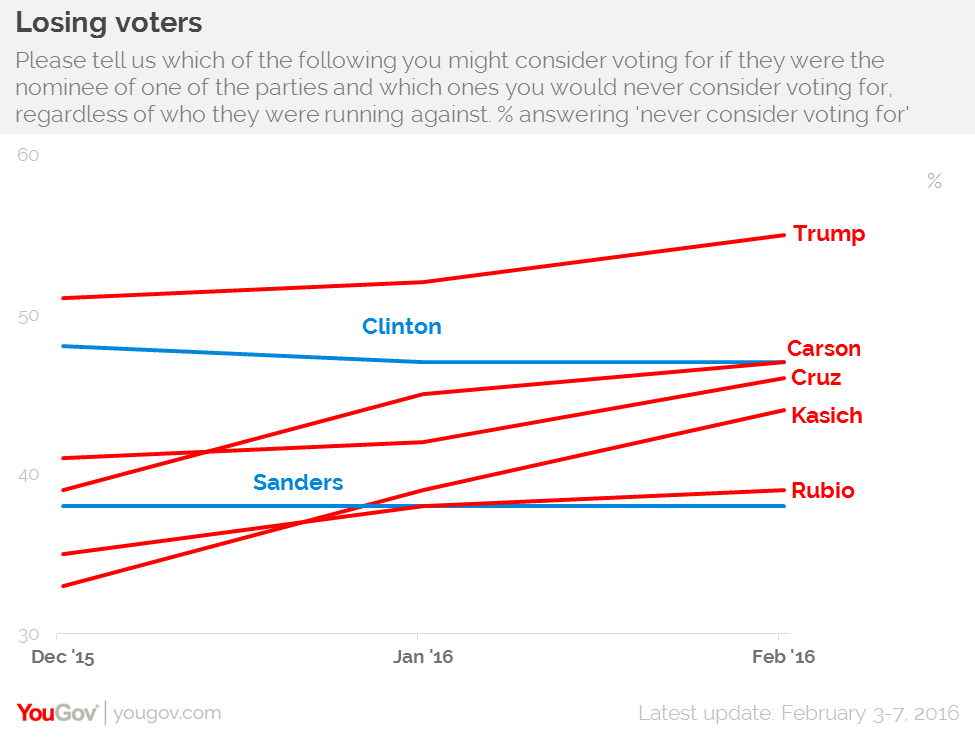 Rising numbers of voters say they “would never consider voting for this candidate, regardless of who they are running against.”

Even among Republican identifiers, there has been serious damage. The percentage of Republicans saying that they won’t vote for each of the candidates has risen over the past three months.  In general elections, winning candidates typically lose less than ten percent of their base. Between 19% (for Rubio) and 35% (for Kasich) of Republicans wouldn’t consider voting for these candidates if they received the Republican nomination. Hillary Clinton doesn’t have the same problem with the Democratic base. Only 12% of Democrats say they would refuse to consider voting for her if she were the Democratic nominee. 17% of Democrats say they won’t vote for Bernie Sanders, but this is a smaller loss than any of the Republican candidates suffer among Republican identifiers. Thus, even among each party’s faithful, the numbers are running against the Republicans, which is especially important for them given that the Democrats are more numerous.

In a recent debate, John Kasich described the fight among Republicans aptly: “This is just crazy.” The Republican nomination campaign is turning into a suicide pact. If the goal is to hurt the chances of a Republican being elected in November, they are succeeding.

Full results for December can be found here, for January here and February here.