The issue of sexual harassment is firmly in the limelight, following recent allegations about various public figures.

YouGov's recent survey on sexual harassment in public places shows that younger women are more likely than older women to say they have been harassed in the last five years. A separate YouGov survey in the UK showed a strong correlation between a woman’s age and whether or not she considered wolf whistling to be acceptable, with older women being much more likely to think it is.

This data raised the possibility that older women have different perceptions of what constitutes sexual harassment, and that this could also be part of the reason why fewer older women say they have been sexually harassed recently. (Although it is still likely to be the case that the largest factor is that harassers are more likely to target younger women).

In order to find out, YouGov has conducted a new study examining the difference in perceptions of sexual harassment both between men and women and across the generations.

Please note: All figures refer to the % of people who agreed to answer questions about sexual harassment

YouGov asked respondents about 12 actions and asked whether they would consider each to constitute sexual harassment if done by a man to a woman who was not his friend or romantic/sexual partner. Many of the actions are very obviously sexual harassment, but some could be considered grey areas.

The genders and generations are broadly united on the more obvious and severe forms of harassment. More than 80% identify upskirt photos, bum pinching, flashing, requesting sexual favours, directing sexual jokes at a woman, and a man going up to a woman in a club and dancing by pressing himself against her as either always or usually sexual harassment.

The most divisive action asked about is wolf whistling. Two thirds (68%) of millennial women (those aged between 18 and 34) say that wolf whistling is always or usually sexual harassment. That figure falls with each subsequent age group to 29% among female baby boomers (those aged 55 or over). 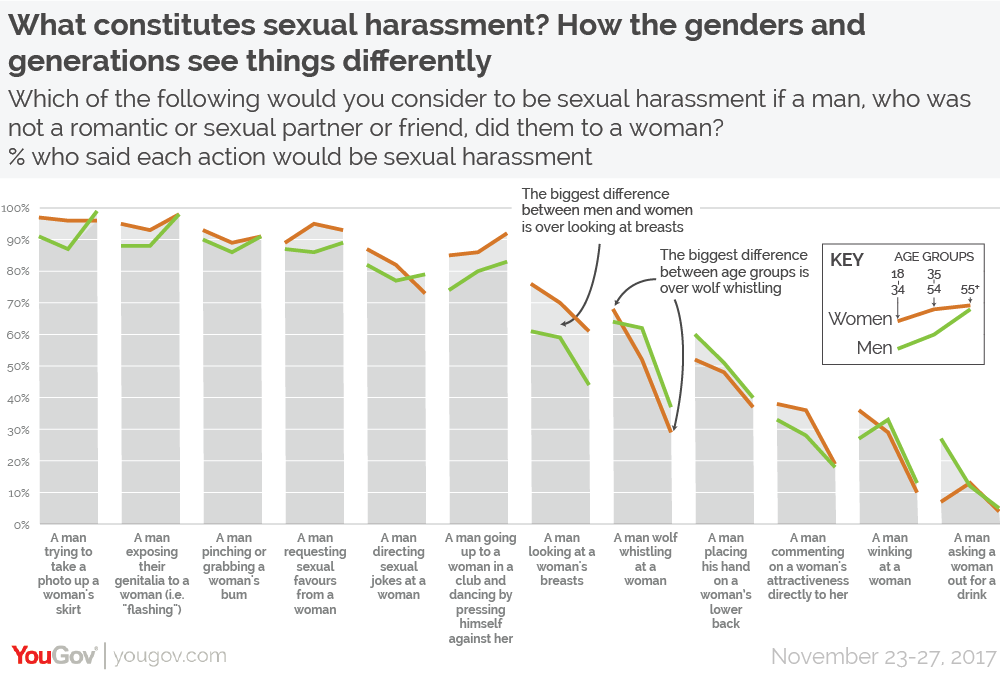 After wolf whistling, the next biggest divisions between younger women and older women are when it comes to winking (36% of millennial women said is usually or always harassment, compared to 10% of the over 55s), commenting on a woman’s attractiveness (38% vs 19%) and a man touching a woman’s lower back (52% vs 37%).

Broadly speaking, the differences in opinion between female generations were also present among men. The issues that divide the genders the most are looking at a woman’s breasts (which women are more likely to see as sexual harassment, at 69% compared to 55% of men) and a man going up to a woman in a club and dancing by pressing himself against her (which 88% of women consider harassment, compared to 79% of men).

It might not be harassment, but is it acceptable?

While older women may not see certain actions as sexual harassment, is it actually that they consider them perfectly acceptable behaviour or do they still believe them to be inappropriate, albeit not specifically sexual harassment?

To test this, we asked women how they would feel if someone who was not their friend or romantic/sexual partner did each of those same actions to them personally.

Among the two actions that most divide younger and older women – wolf whistling and winking– there are indeed noticeable differences in sentiment between the generations. Older women are significantly more likely than their younger counterparts to say that they do not find these behaviours inappropriate.

Again, wolf whistling is the most divisive behaviour. 58% of millennial women consider it inappropriate, compared to just a third (34%) of females in the 55+ age group. Indeed, three in ten (30%) women aged 55 and over say it is acceptable behaviour (including 23% who'd find it flattering), while another 34% have no strong feelings on it. 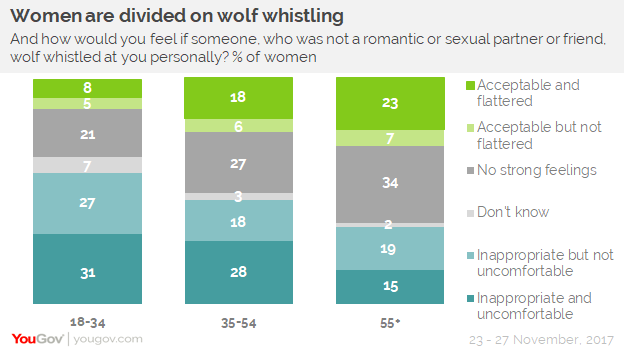 Perceptions differ on how widespread harassment is

While the research uncovers how women of different ages see sexual harassment differently, it could suggest that the largest reason that older women are less likely to say they have been sexually harassed recently is simply because they haven’t been harassed at all.

*Data was collected online by YouGov Omnibus between 23 and 27 November 2017 among 773 respondents in Australia. Results are representative of the adult population.