Barbie or Action Man? It’s unlikely you played with both in childhood. The market for children’s toys is deeply divided. But which toys, if any, are suitable for both boys and girls? And should children’s toys be so heavily gendered? YouGov, the world’s leading online research firm, polled over 10,000 people across the Asia Pacific to find out.

Nearly half of APAC residents (45%) believe children’s toys are too gendered; just one in five (19%) disagree. There is an even broader consensus around which types of toys children should play with; 70% of those polled believe it’s important for children to play with a wide range of toys and not just those that are considered gender specific.

Of the nine countries polled, Australia is the only country polled where the majority of respondents would either be very likely or somewhat likely to let a boy play with a Barbie doll (50%), an easy bake Oven (62%) or a tea set (57%). At the other end of the spectrum, Indonesia is the only country where a majority believe that it is either very unlikely or somewhat unlikely they would allow a boy to play with a Barbie doll (69%), a tea set (56%) or an easy bake oven (53%). 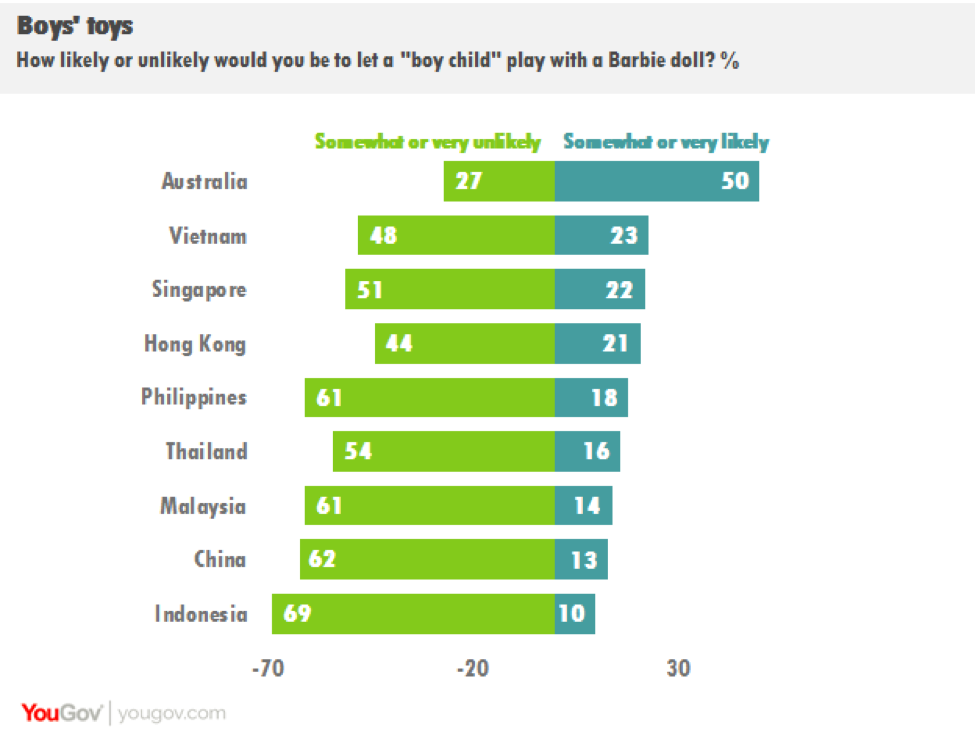 It is not just boys that are limited in the variety of toys that people deem suitable. While trucks/car are considered the toy most suitable for boys (85% of those polled think it is an appropriate toy for a boy), just 29% of those polled believe that trucks/cars are suitable toys for girls to play with.

Only 36% of respondents believe pink is only for girls

Branding and marketing experts will be interested to note that colours are not seen as gendered as stereotypes might suggest. While only a third of respondents (36%) believe that pink is only for girls, just a fifth (20%) believe that blue is only for boys.

However, anyone hoping for a revolution in toys’ packaging will be disappointed by how the results break down by gender. While only 29% of women agree that pink is only for girls, so long as 43% of men still agree it could be a while before you find a pink Action Man in a store near you! 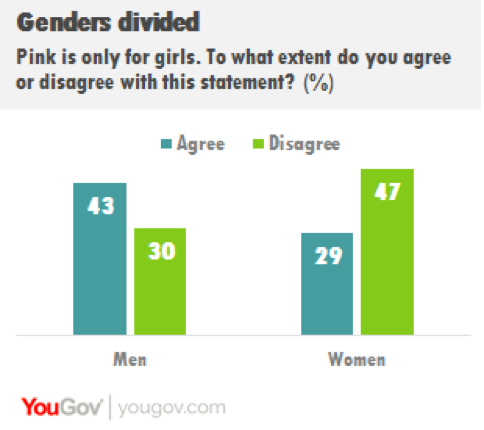