YouGov research finds that as much as 96% of APAC respondents have made vows to themselves for 2017. While saving resolution is the most common in the eyes of APAC respondents, health resolutions also come strong in their minds. But with the first month of 2017 now behind us, how many people are still keeping to their New Year’s resolutions?

The top 5 New Year’s resolutions in APAC are: saving more money (67%), eating more healthily (52%), travelling to one or more place that they have never visited (48%), losing weight or getting fitter (46%), and getting a better work-to-life balance (39%).

While saving more money stands as the top New Year’s resolution across all 9 APAC countries interviewed, Filipinos vow this most (82%), doubling the no. of Aussies who resolve the same for the new year (41%).

Besides money, respondents from the Philippines and Vietnam also concern about appearance, with 43% and 57% of them saying they want to take more care of their appearance in the New Year. Different from the rest of APAC countries interviewed, getting groomed is also one of the top 5 New Year’s resolutions in these two countries. 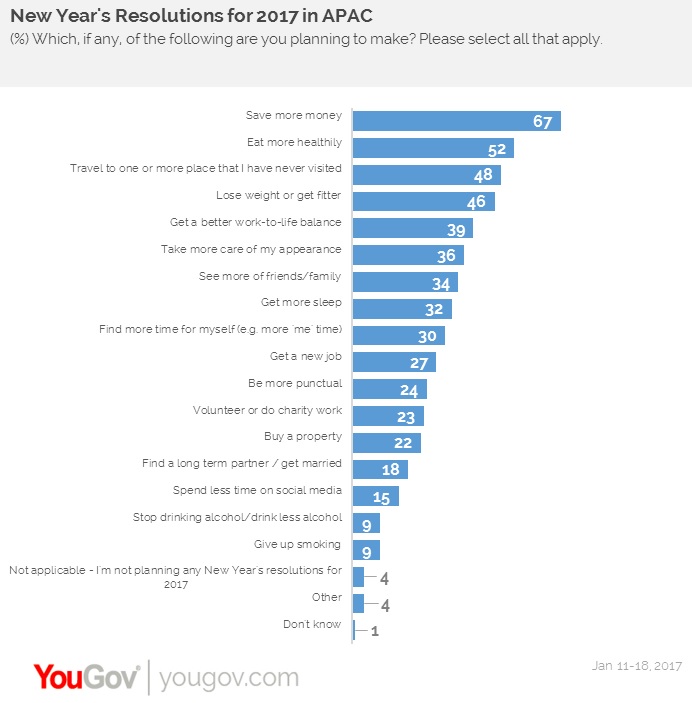 Aussies are less likely to have made resolutions for 2017

Younger people are more likely to have made resolutions than their elder peers, with only 4% of those 16-34 year olds saying they are not planning to make any resolutions for 2017, compared to 24% of those 35+ year olds.

Chinese are most likely to keep their New Year’s resolutions

More than one in five respondents in China say they never tend to break new year resolutions (22%), which is much higher than the regional average of 16%, and doubling the no. of Filipinos who say so (11%).

Want to know what are the British’s resolutions for the New Year? Take a look at our UK survey.